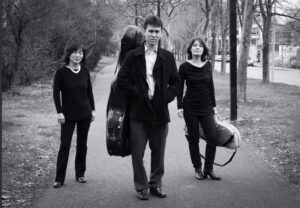 “Whenever this trio plays, drop everything and go hear them!” hailed The Boston Globe on the occasion of The Boston Trio’s Tanglewood debut at Ozawa Hall. Since their formation in 1997, the trio has quickly become one of today’s most exciting chamber ensembles. Acclaimed for their superb sense of ensemble and wondrous balance, these virtuosic and profound musicians are committed to creating exceptional and daring performances of standard and contemporary repertoire.

Violinist Irina Muresanu, cellist Jonah Ellsworth, and pianist Heng-Jin Park each have distinguished careers as soloist, recitalist, chamber musician, and have appeared with major orchestras and premier chamber music festivals throughout the United States and Europe. Cellist Mr. Ellsworth has performed as a soloist with the Boston Symphony, Akron Symphony, Boston Philharmonic, Jacksonville Symphony, Johnstown Symphony, Symphony by the Sea, and New Bedford Symphony. Additionally, Ellsworth attended the Marlboro Music Festival from 2014-2016. Ms. Muresanu, who has appeared as soloist with the Boston Philharmonic, the Orchestre de la Suisse Romande, and other top international orchestras, is the recipient of top prizes at the Montreal International Competition and the Queen Elizabeth Violin Competition. Ms. Park, who made her solo debut with the Boston Pops at the age of 15, is the founding member of the Boston Trio and founder and artistic director of Halcyon Music Festival.

The Trio has coached chamber music at the Tanglewood Institute of Music and served as Ensemble-in-Residence at the American Academy of Arts and Sciences in Cambridge from 1997 to 2004. The ensemble was in residence at the New England Conservatory Preparatory School. The Trio is committed to bringing chamber music to a broader audience through outreach activities at public schools and assisted living centers. The individual members serve on the faculties of the New England Conservatory, the Boston Conservatory, Harvard University, and the Massachusetts Institute of Technology, and are in demand as master class teachers throughout the United States, Asia, and Europe.

A COPY OF THE OFFICIAL REGISTRATION AND FINANCIAL INFORMATION MAY BE OBTAINED FROM THE DIVISION OF CONSUMER SERVICES BY CALLING TOLL-FREE 1-800-HELP-FLA OR ONLINE AT www.FloridaConsumerHelp.com, REGISTRATION DOES NOT IMPLY ENDORSEMENT, APPROVAL, OR RECOMMENDATION BY THE STATE.” REGISTRATION #: CH2935

Program Listing
Contributors of $50 and up are entitled to a program listing. Enter your name as you would like it to appear in the program in the Notes section at checkout.

Preferred Section Seating
Contributors of $125 to $499 per person above and beyond ticket purchases will be seated in the Preferred section.

Reserved Section Seating
Contributors of $500 or more per person above and beyond ticket purchases will have a named seat in the Reserved section.

Online Orders and Contributions
Online orders and contributions will be confirmed by email. Your email is your ticket. At the concert, show your printed confirmation email or show it on your phone or tablet. For any questions about online orders or contributions, email us at [email protected] or leave a message on our hotline at 239-344-7025.

Mail-in Orders and Contributions
Mail-in orders and contributions for March 2022 performances will be acknowledged starting in November 2021. Tickets will be mailed in February 2022. Orders received by mail after February 15 will be held for pickup at the door.