“He drew the audience in and didn’t let go until the last quiet note.” — Culture Spot LA

2017 Silver Medalist returns to make his first Cliburn Concerts appearance, after a debut season that included a recital tour in Hawaii and across 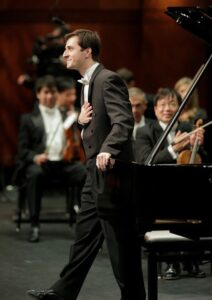 the country; a return to his alma mater, the University of Houston, for its annual Texas Music Festival; and an acclaimed engagement with the Minnesota Orchestra deemed “highly auspicious…marked by poise [&] technical brilliance” by the Star-Tribune. A native of Minneapolis, Kenny Broberg won prizes at the Hastings, Sydney, Seattle, and New Orleans International Piano Competitions before taking home second in Fort Worth last year. He currently studies with 2001 Cliburn Gold Medalist Stanislav Ioudenitch.

Broberg was featured on NPR’s radio program for young musicians, From the Top, two times early in his career at the age of 16. He has since been broadcast on other radio stations across the world including ABC in Australia and KUHF in Houston, Texas. Broberg has performed as a guest soloist with orchestras around the world including the Royal Philharmonic Orchestra, Minnesota Orchestra, Seattle Symphony Orchestra, Tel Aviv Symphony, and many others.

A COPY OF THE OFFICIAL REGISTRATION AND FINANCIAL INFORMATION MAY BE OBTAINED FROM THE DIVISION OF CONSUMER SERVICES BY CALLING TOLL-FREE 1-800-HELP-FLA OR ONLINE AT www.FloridaConsumerHelp.com, REGISTRATION DOES NOT IMPLY ENDORSEMENT, APPROVAL, OR RECOMMENDATION BY THE STATE.” REGISTRATION #: CH2935

Program Listing
Contributors of $50 and up are entitled to a program listing. Enter your name as you would like it to appear in the program in the Notes section at checkout.

Preferred Section Seating
Contributors of $125 to $499 per person above and beyond ticket purchases will be seated in the Preferred section.

Reserved Section Seating
Contributors of $500 or more per person above and beyond ticket purchases will have a named seat in the Reserved section.

Online Orders and Contributions
Online orders and contributions will be confirmed by email. Your email is your ticket. At the concert, show your printed confirmation email or show it on your phone or tablet. For any questions about online orders or contributions, email us at [email protected] or leave a message on our hotline at 239-344-7025.

Mail-in Orders and Contributions
Mail-in orders and contributions for March 2022 performances will be acknowledged starting in November 2021. Tickets will be mailed in February 2022. Orders received by mail after February 15 will be held for pickup at the door.